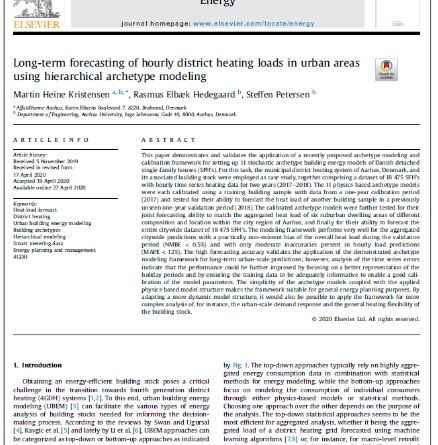 This postdoc project focused on applying a data-driven approach to resolve the aims of this deliverable in terms of the hourly smart meter data obtained from all customers in the district heating network of Aarhus .In particular, the project investigated the application of using customer data to set up, calibrate and validate physics-based archetype heating energy models of the different building typologies in the city, to be used for reproducing the district heating load in the system and subsequently forecast future loads. These archetype models could then be used to analyse the effect of different demand-side interventions on the system load, for instance the effect of typology-specific retrofits and energy flexible demand response schemes.

Four formal publications were published based on the postdoc work: three in international journal magazines and conference proceedings, and one less formal article in a Danish magazine aimed at district heating professionals.

In both demand-response experiments, the goal was to evaluate the user experiences and their perception of the thermal environment when exposed to a scenario where their heating is shut off during the critical peak-hours, i.e. during morning-hours when the district heating capacity is stressed.

However, none of these experiments were finalized before the deadline of this deliverable. The work done in the postdoc is currently being used actively in the Energy Leap network initiated by the Aarhus Climate Secretariat. Here professional building owners commit to improving energy efficiency and use benchmarking as one of the tools in visualising potentials and the impact of efforts made.